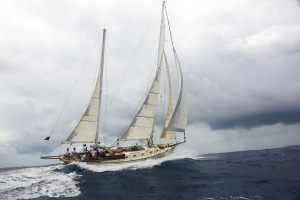 Desiderata is competing in the third edition of the now legendary Panerai Transat Classique. The prestigious fleet of classic yachts will battle fiercely against each other and the elements to race from Lanzarote to Fort-de-France, Martinique, in January 2015.

“With entry restricted to classic vessels, the Panerai Transat Classique is one of a kind in its quest to keep the spirit of the golden age of yachting alive. What’s more, this unique event has all the excitement you’d expect from a veritable ocean race as rival crews pit their wits against the weather and each other.” – Panerai Transat.

3000 miles of pure ocean racing will test the crew and the yacht as they race across the Atlantic Ocean. Being out there is an amazing experience where respect needs to be given to your fellow crew members, the yacht, and of course the powerful elements. Plus, there is nothing quite like racing on a beautiful classic yacht.

“When they set out on 7 January from the island of Lanzarote, these graceful ladies of the sea will have to face 3,000 nautical miles of ocean until they tie up in Fort-de-France Harbour, Martinique. Their immediate priority will be to pick up the trade winds as quickly as they can, but first they will have to navigate their way out of the labyrinthine archipelago of the Canary Islands. After a long stretch under spinnaker and trying to dodge the dead zones, the crews will then have to negotiate the long arc of islands that make up the Lesser Antilles. With such an exacting course, only the most accomplished crews can expect a place on the podium.” – Panerai Transat. 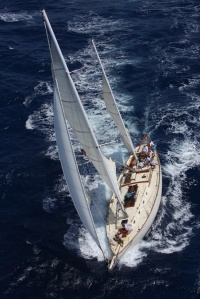 Only certain yachts are eligible to compete in this prestigious race. Read about Desiderata’s qualifying history and design.  All yachts must be monohulls and they must comply with the AYC’s definition of a classic yacht. This includes:

How To Join In

Whether you are a seasoned racer or a novice, Stuart and Julia invite you to join the competitively spirited crew on Desiderata. Just two places are left so don’t delay! For those unable to join in the fun you can follow the race in real time on Facebook or Twitter. 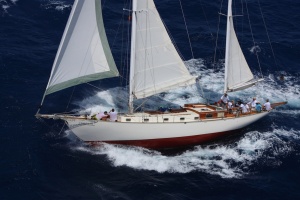 2014 was a year to note for Desiderata and her competitive crew. The classic yacht excelled in the big seas and strong winds that characterised the racing during this regatta. The conditions were perfect, and “Desi” surpassed herself proving to all that she is an ocean racing yacht to contend with. 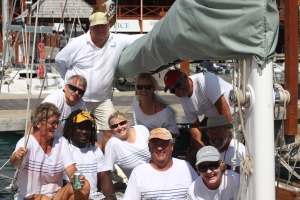 Tommy Patterson, manager of Antigua Yacht Club Marina, skilfully manned the helm steering her to success. Desiderata won 1st in class and 1st in fleet. Alongside Tommy, the competitive crew, with big smiles on their faces, worked diligently to gain three guns out of a possible four. 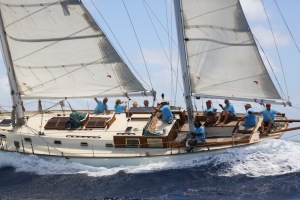 Stuart and Julia led the mixed crew, who ranged from novice through to experienced racers. The brisk tradewinds ensured on-water thrills for the team and the salt-encrusted crew stepped off “Desi” each day drenched but beaming. Antigua holds one of the best classic yacht regattas, not just for the courses and conditions, but for the camaraderie and sheer fun of it all. See more photos from Antigua Classic Yacht Regatta here.

“We come here because it is the best classic regatta in the world. Two of our crew have never been here before and out there today, looking at all those boats, they were gobsmacked with the beauty of the fantastic boats and winning was just the cherry on the top.” 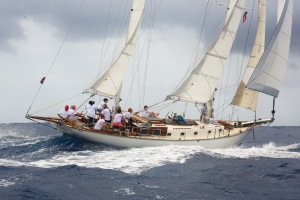 What’s Next For Desiderata?

John Alden would be proud to see his Malabar XIII design still making waves on the regatta circuit today. Next up for Desiderata and her lucky crew… the Panerai Transat Classique 2015! There are only two crew places left available so get in touch with Stuart and Julia today to ensure your place on the fun loving team. 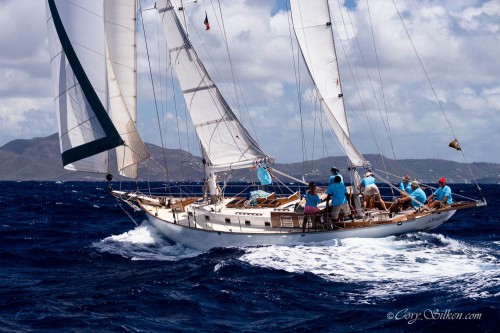 There were hundreds of smiling faces in Falmouth Harbour this morning. The 27th Edition of the Antigua Classic Yacht Regatta kicked off in glorious Caribbean weather, 20 knots of warm Trades’ and two metre seas provided exciting conditions for the wondrous fleet of classic yachts that have gathered in Antigua. The Old Road Course had plenty of reaching legs, with beautiful yachts sailing fast, sliding down Caribbean surf, it was a fantastic day on the water.

The Vintage Classic Fleet produced some of the closest racing today. In Class A, Scott Franz’s American 72′ Herreshoff, Ticonderoga of Greenwich was the winner with the American 1925 Herreshoff Schooner Mary Rose taking Class B. However after time correction, Michael Jarrald’s British 66′ Cutter, Lily Maid, built in 1904 was the winner of Class B and the Vintage Classic fleet.

In the Classic GRP Fleet, Stuart Armstrong’s John Alden designed Desiderata was the winner, taking Line Honours and the win after time correction. Desiderata was built in 1975 and has sailed around the world. Today, British couple, Stuart and Julia are the proud owners, living happily on board, all year round. Desiderata had an extensive refit in 2013.

“An absolutely amazing day, we got the gun and we are first in class, how much better could it be?” Laughed Stuart. “We had our secret weapon on the helm, Tommy Patterson manager of Antigua Yacht Club Marina. We come here because it is the best classic regatta in the world. Two of our crew have never been here before and out there today, looking at all those boats, they were gobsmacked with the beauty of the fantastic boats and winning was just the cherry on the top. Recently the boat has had a lot of work done to her and it is very rewarding to win today, having put so much effort into Desiderata, she has paid me back today.”

In Classic GRP Class B, Springtide raced by a St.Maarten team, skippered by Robbie Ferron, took the win but only just. Martin Halpern’s Ruffian was less than a minute behind on corrected time.

The Alwyn Enoe designed 42′ Carriacou Sloop, Genesis showed a clean pair of heals today in the Traditional Racing Class, taking Line Honours by over 12 minutes and correcting out to win the first race of the regatta. Antiguan Alexis Andrews, skipper of Genesis was dockside in a big huddle of Carriacou Sloop sailors, enjoying a cold drink dockside in Falmouth Marina.

“All the Carriacou sloops are on the dock after the race and the atmosphere is hot.” smiled Alexis. “We were all flying today in plenty of wind, which is what these boats like. Genesis is a very heavy boat and beamy, the heaviest of all the Carriacous with a lot of ballast, so she likes a lot of weather and big seas, which we got today. We have Sean Davis and Jerisse Williams on board, who are both great young Antiguan sailors. Sean is a fisherman with big hands and he needed them today on the main sheet, he did an excellent job. Exodus is a new boat for the crew and she is very fast, they have put a lot of effort into her development, she has a fast hull and they are tweaking stuff all the time, I am sure she will be a fast boat by the end of the week.”

In the Spirit of Tradition Class, Michael Hough’s 49′ Chloe Racing Spirit, corrected out to win the race. Classics’ Race Reporter, Louay Habib took a ride on the beautiful J/Class, Rainbow for today’s race.

The original Rainbow was launched in 1934, commissioned by Harold Vanderbilt for the America’s Cup. 78 years later the new Rainbow, designed by Dykstra Naval Architects, was launched at Holland Jachtbouw. The latest version has a luxurious mahogany interior, the mast is carbon and Rainbow is bristling with the latest deck systems. In cruising mode, the 130′ J/Class can be sailed by just six people.

“Unfortunately the owner was unable to attend the regatta but he made Rainbow available to his friends.” commented Marc Heupers.  “The regular crew and the guests worked together as a team and we had a fantastic sail today. When we race Rainbow against the other J/Class yachts it is very different to racing at Classics. We have a much larger race crew and the boat is pushed to the maximum. However, at Classics we sail safely and just have a lot of fun. We had a great moment today when we caught up Old Bob. The Old Bob crew were blowing party hooters and shouting and waving at us, so we waved back and gave Old Bob a loud blast on our air horn – That is the spirit of Antigua Classics and we love it.”